The genus Mandevilla belongs to the family Apocynacea which includes mostly tropical and subtropical vines. Most of the roughly 100 species are native to the South-western United States, Mexico, Central America and South America. The genus was named after Henry Mandeville (1773-1861), a British diplomat and gardener. (http://en.wikipedia.org/wiki/Mandevilla).
Many hybrids have been developed; most of them have red, pink or white flowers:
http://www.lannes.pro/fr/dipladenia_diamantina_professionnels/collection_dipladenia_diamantina.htm
Yellow varieties like “Opale Citrine” are rare. The flowers of this variety are huge with a diameter of 8-9 cm.

The plant was purchased from a florist, Germany July 2013, and photographed on 24 August 2013.

The flowers show a very prominent UV-signature with a dark centre area and a very reflective circle around the nectaries. The UV-dark area appears orange in visible light and the central UV-bright ring appears white when illuminated with visible light. The latter fact can be hardly seen in the image below, because it is shaded inside the flower. 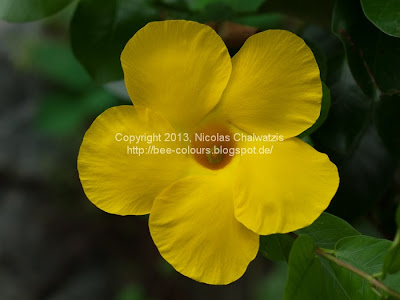 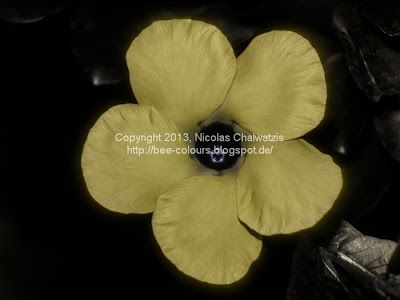